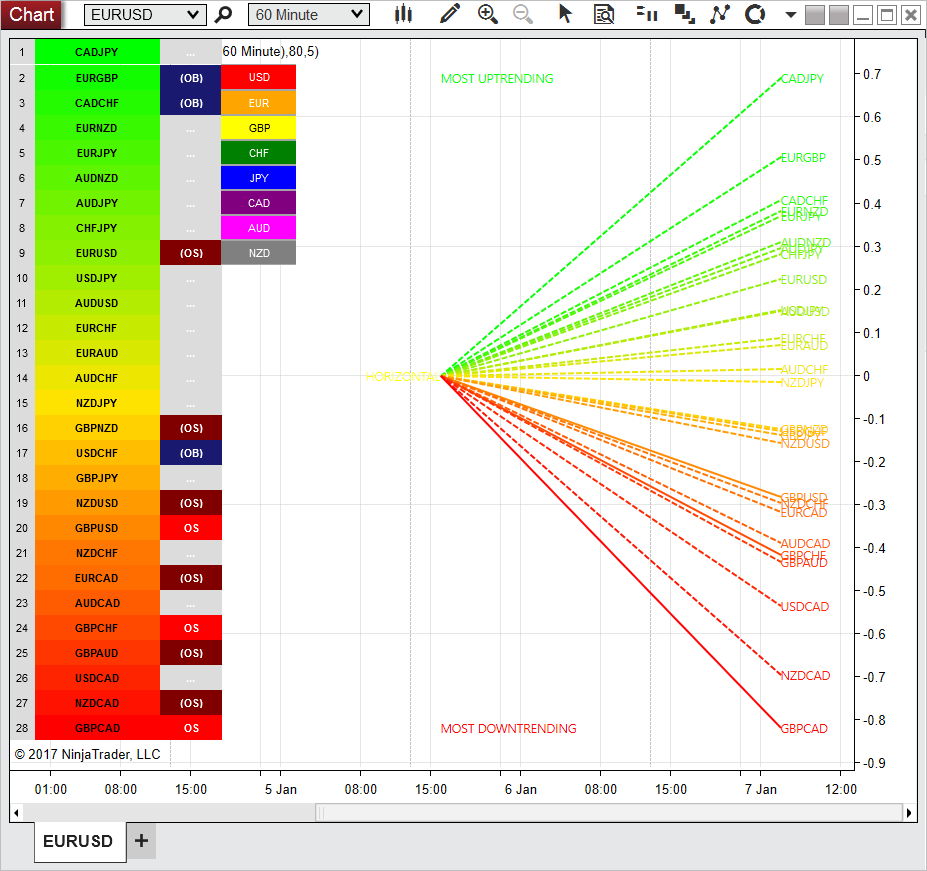 In displaying all the pairs in an array this gives an instant view of the relative trend strength and displays this relationship in a visual and intuitive manner in three ways. Each one shows a different perspective and insight into the complex world of currency strength concepts.

First, the indicator displays 28 major currency pairs in a ranked list ordered by the strength of the trend. The currency pair with the greatest momentum and steepest uptrend appears at the top of the list while the one with the greatest momentum and steepest downtrend appears at the bottom. All the other pairs are then ranked accordingly, and color coded from red at the bottom, to yellow and into green at the top of the ranking table. Currency pairs in congestion appear in the middle of the table.

Once any of these signals appears beside a currency pair, it signals the potential impending change in direction of the trend, which can then be considered further by analysis of the chart. For example, if the EURGBP is seen at the very top of the list and beside it is an OB signal, it means that although the uptrend is seemingly strong, the bullish strength driving it may be reaching an exhaustion point, starting to diminish with a possible change in direction in due course.

Secondly, it displays the same 28 major currency pairs as lines in a graph that diffuse out into the array and with varying magnitudes depending on the strength and inclination of each currency pair’s trend. This means the order in which they appear vertically follows the same ranking in the table alongside, but as a graphical display, instantly, visually and numerically revealing the actual steepness of each currency pair’s trend. As you would expect the currency pair with the fastest and steepest uptrend also has the steepest UPWARD line in the graph. Likewise, the fastest and steepest downtrend also has the steepest DOWNWARD line in the graph. Currency pairs with the least steepness in their trend (and in congestion) are found closest to the 0 level of the graph and appear horizontal. 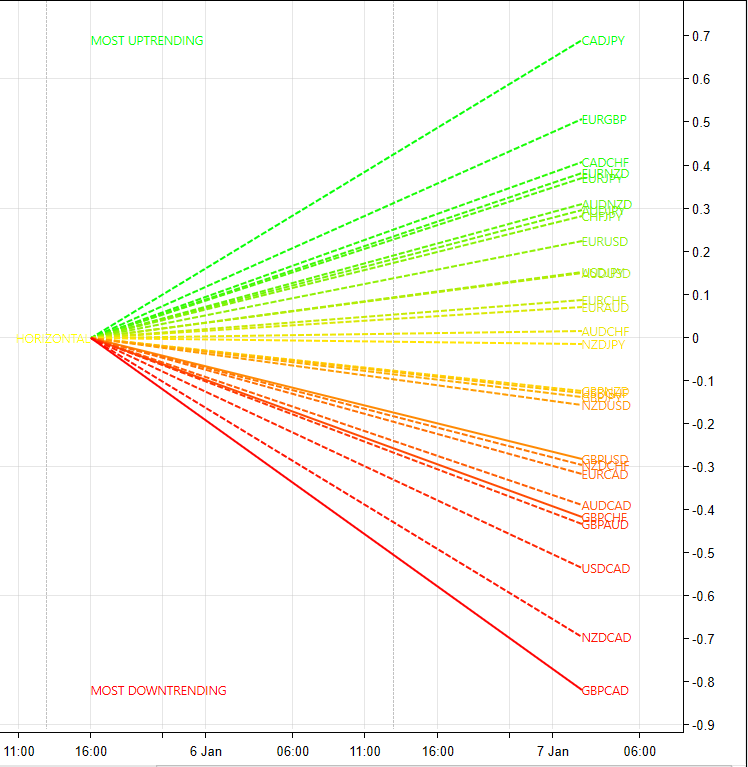 You can also see each line in the array has one of 2 different line styles. Its style depends on the state of its corresponding currency pair as defined above.

One of the most powerful features of the array when watching trends develop in real time is not only considering one pair, but how pairs move together ‘en masse.’ This can give you huge confidence when taking a position in the market, as you will see all the currency pairs for that complex “marching together” stretching higher or stretching lower and reflecting market sentiment for that currency and its associated pairs. This is immensely powerful, and will give you the confidence, not only to take a position, but then to hold it to maximize your profits from the trend. 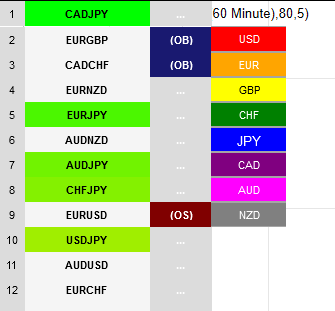 The Currency Array indicator allows you to filter the currency pairs relevant to the currency you are trying to focus on. Just like the Quantum Currency Matrix indicator, a set of toggle buttons are available for  this purpose but is located beside the ranked list and OB/OS column.

Click then once to filter, and then click again to remove the filter. When a certain currency filter is in effect, the relevant currency pairs in the table appear colored while the others are not.

And this leads on to the third aspect of the Currency Array indicator which is this – it will give you an instant heads-up to divergence across a currency complex, and the easiest example here is with the Japanese yen which is the counter currency for the major and cross pairs. On the array we should expect to see all the currency pairs on one side of the mid point or the other. After all, if the flow of sentiment for the Yen is universal, then we would expect to see all the currency pairs aligned accordingly, whether with selling or the yen or buying. If not, then we have some divergence, and the flow of sentiment is not universal. If you are trading a pair which is perhaps counter to broad sentiment, then this is a high risk proposition. The currency array will tell you this instantly and visually and across all the timeframes with a single click and on ONE chart. No need to try to scan 28 charts. It is all here for you.

One of the coolest features we have introduced recently across all our indicators is the dynamic graded color coding; found in both the ranked list and the graph which makes interpreting intuitive and fast. You can probably see instantly just from the images how easy it is, but we will walk you through anyway.

The currency pairs appear as a color in the range of a green-yellow-red gradient (in that order). Simply put, the color of each currency pair varies depending on its value, in this case the steepness of the trend:

The same color gradation applies to the array itself. It is important to note the yellow levels are not precisely in the middle of the list (rank 14 of 28). The gradation of color is dynamic and hence the transition of colors will depend entirely on the steepness of the trend of each currency pair as explained above. As with all our other indicators, this is dynamic and is constantly shifting in real time to reflect the ebb and flow of sentiment across the timeframes.

Here are some further details on the Currency Array indicator to help you get started:

These four indicators then provide a unique and compact insight into all the various aspects of strength and weakness for both currencies and currency pairs, from trend and momentum to overbought and oversold. What is unique is that using four charts, you are then able to monitor the myriad combinations of strength, weakness, momentum, congestion and divergence across the entire Forex complex at a click of a button. And even more powerfully, giving you the confidence to get in and stay in for maximum profits. No more missed opportunities, no more struggling with multiple charts, and no more trader regret, whatever your trading style or approach. 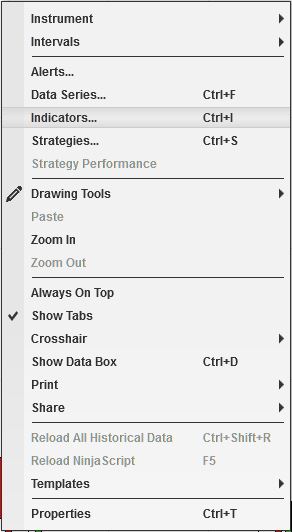 Select Indicators… which will open the following window. (Alternatively, you can open this window by clicking the Indicators button in the chart toolbar or by pressing Ctrl + I while focused on the chart) 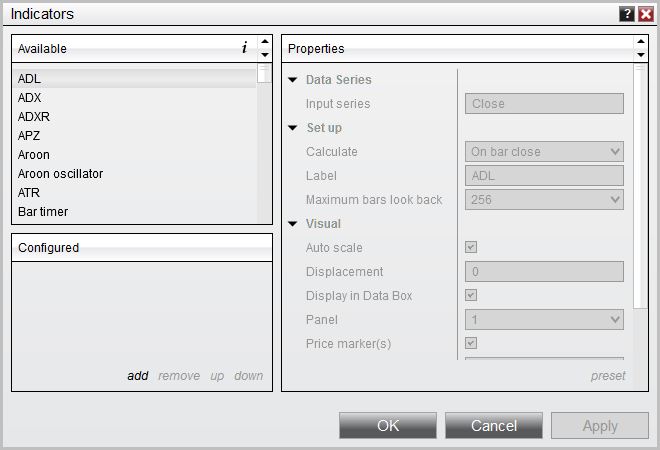 In the Indicator window, scroll down to the QuantumCurrencyArray indicator and click it to select the indicator. Once selected, click add in the Configured frame which will put it on the list of active indicators to be added in the chart. 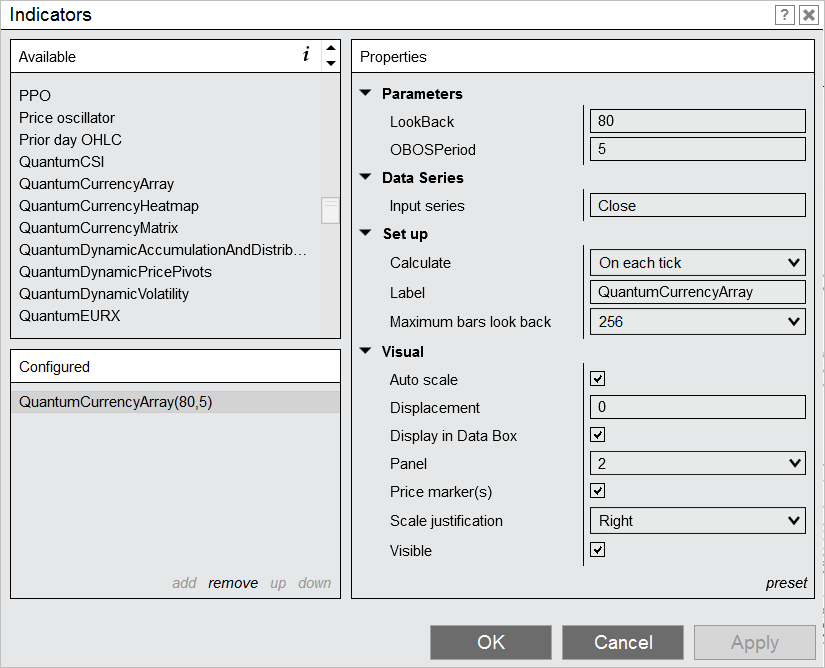 All of the user configuration is down on the right hand side of the Indicator window. These are the default setting when you first install the indicator to a chart. 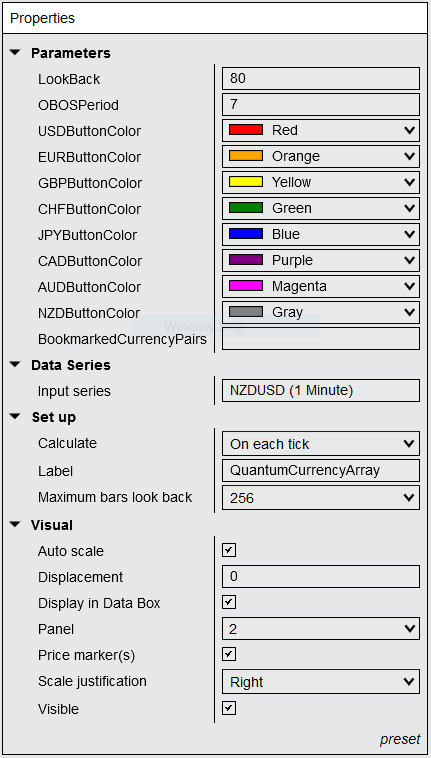 These are the Parameters inputs:

LookBack – The value of this parameter determines the starting point of the period the indicator processes up to the most current bar. By default, the indicator looks back to 80 bars.

OBOSPeriod – This parameter is a factor to calculating the Overbought/Oversold (OBOS) signals of each currency pair. It is expressed as the number of bars and is set to 5 bars by default.

USDButtonColor – This property defines the color of the USD button. Its default color is red.

EURButtonColor – This property defines the color of the EUR button. Its default color is orange,

GBPButtonColor – This property defines the color of the GBP button. Its default color is yellow.

CHFButtonColor – This property defines the color of the CHF button. Its default color is green.

JPYButtonColor – This property defines the color of the JPY button. Its default color is blue.

CADButtonColor – This property defines the color of the CAD button. Its default color is purple.

AUDButtonColor – This property defines the color of the AUD button. Its default color is magenta.

NZDButtonColor – This property defines the color of the NZD button. Its default color is gray.

BookmarkedCurrencyPairs – This is a new feature we added to the Currency Array which helps you keep track of currency pairs you’re interested in wherever they are in the list. To bookmark a currency pair, simply enter its symbol (without any prefix or suffix) in this field like so:

You can bookmark multiple currency pairs at the same time by adding a space between them. For example, if you like to bookmark EURUSD, AUDCHF and USDJPY, simply enter the following value in this field:

All bookmarked currency pairs are given a distinct color so you can see them easily in the constantly changing list. They are also not affected by the currency filters.

Input series – please DO NOT change this setting.

Calculate – please DO NOT change this setting and leave as the default of On each tick.

Label – there is no need to change the value of this configuration.

Maximum bars look back – this is the maximum number of bars in the look back for the indicator. We suggest you leave this as the default of 256 as it is memory friendly

These are the Visual inputs:

Label – this is the label which will display on the chart once the indicator is attached.

Panel – this specifies the panel number where the indicator will appear. We suggest you leave this as is.

Once you have made any changes to the settings for the Quantum Currency Matrix indicator, left click the OK button to complete and update the indicator.

When you first apply the Currency Array Indicator to the chart the indicator window may need resizing, and below is an example of how the indicator may look with the default white background of a NinjaTrader chart: 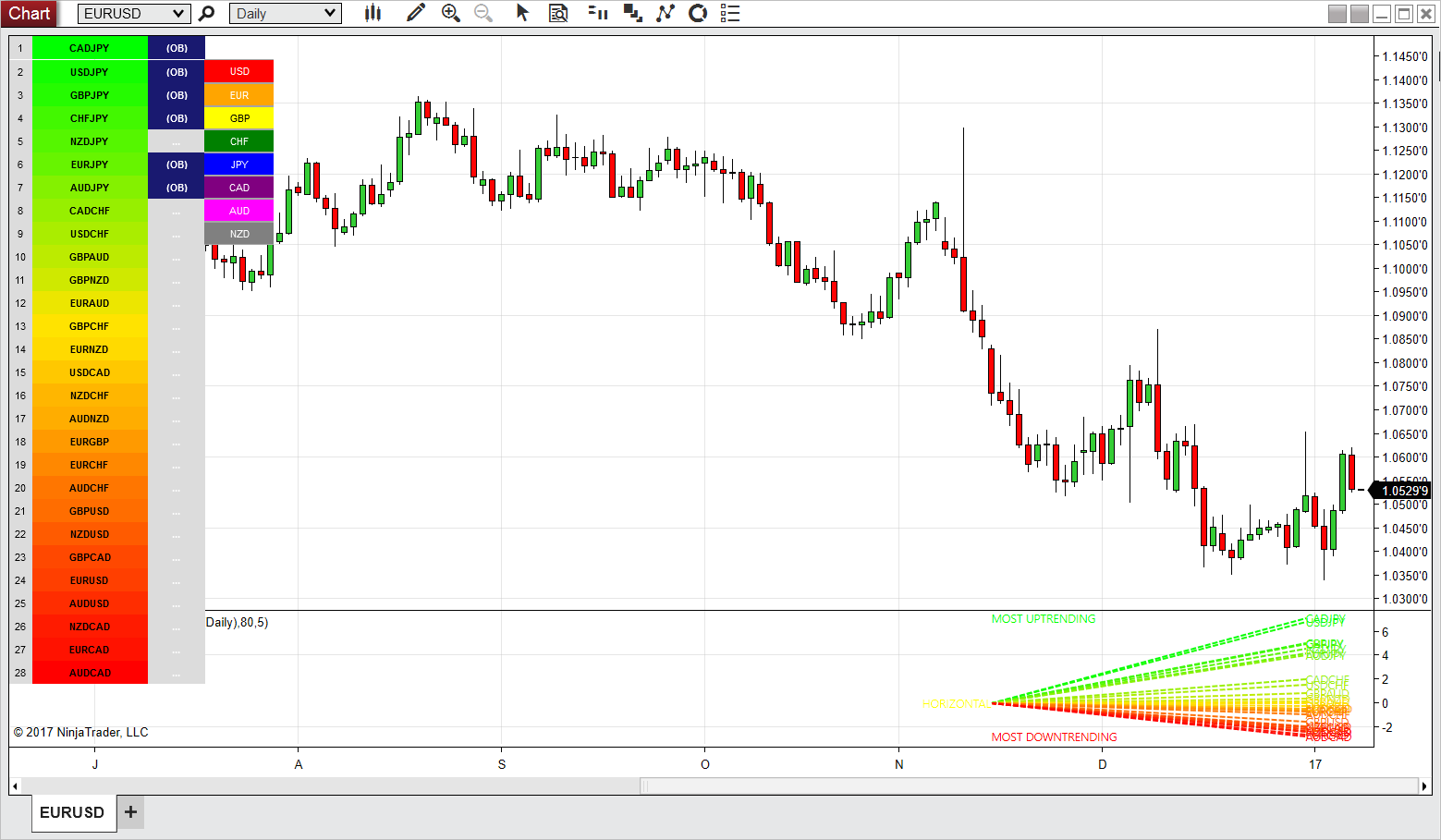 Aside from the ladder of currencies, the Currency Array also displays a graphical representation of this list which is displayed at a separate indicator window below the chart. To enlarge this space, simply hover your mouse at the top of the divider between the chart and the Currency Array’s graph then click and drag it upwards until its space is maximized. You can also adjust the size of the chart’s window itself to make it more compact and fit in your trading workspace. 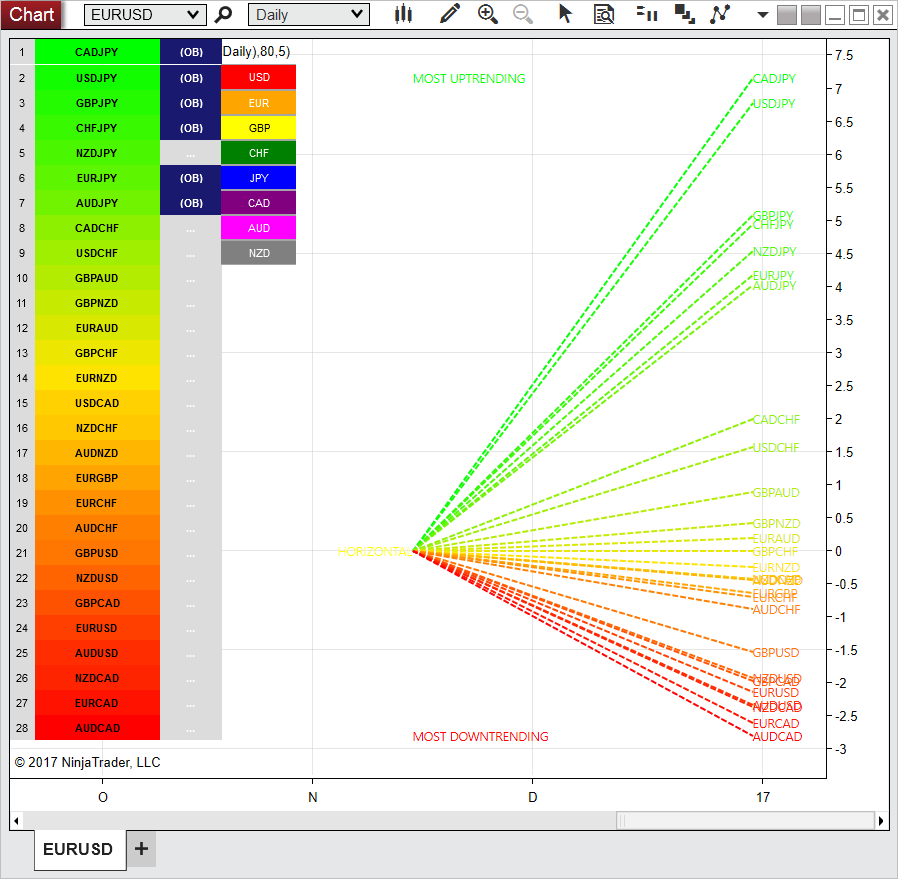 These are the steps to remove an indicator from a chart. 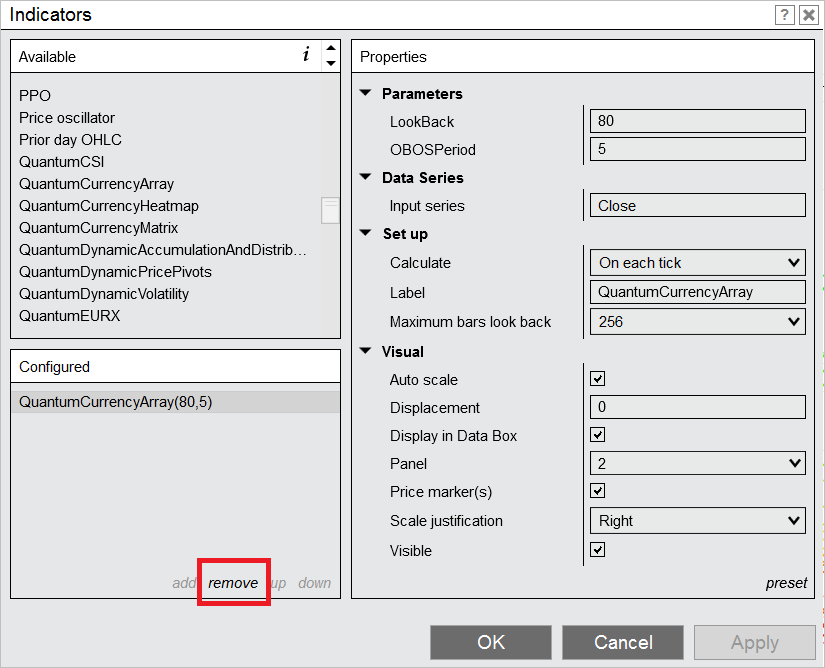 Right click on the chart then select Indicators… from the menu. Select QuantumCurrencyArray from the Configured frame and click remove. Click OK to confirm and the indicator should be unloaded from your chart. 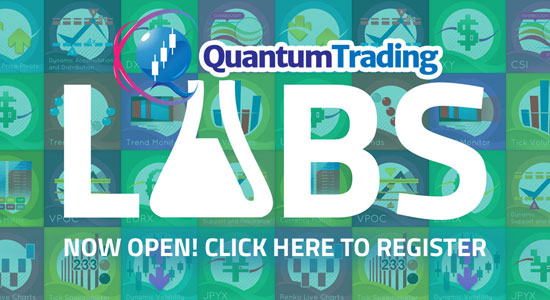 Many thanks to you. I am extremely positively impressed by your customer focus. It is so nice to find a trustworthy company in the online world and in an environment so full of scams.

I love the CSI indicator it's money in the bank

Thank you for your prompt reply and for, as always, providing top notch support.

The indicators are great by the way, they are helping me to get into and stay in winning trades whenever I have used them. Just great!

Finishing off, I would just like to say I am extremely impressed with your customer support; the way you perform in your role as support is impressive; and believe me I am hard to impress particularly when dealing with people from the trading industry.

You guys have done a fantastic job to get me up and running. CSI is working like a charm and I can already see its advantages. Thank you once again for your wonderful support. Have a wonderful weekend.